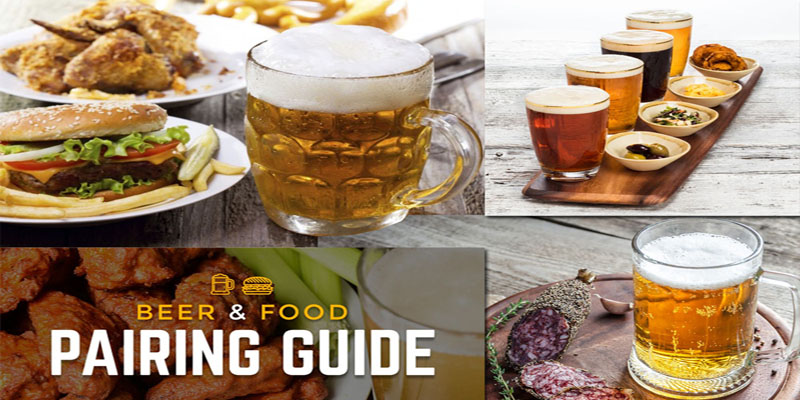 Certain beers certainly seem to go well with some foods. Almost always, the pairings below guarantee a great meal, balanced with an incredibly refreshing brew, or at least that’s what beer gurus say now! At times the types of beers by countries determine the combination or pairing. Let’s take a look at some pairing below

The flavour profile of grilled vegetables such as onions, peppers, and mushrooms appears to be earthy and savoury. Often, however, they can be a bit too sweet or a bit too rich for most beers.

Pairing grilled vegetables with a dark, roasted beer with a slight hint of malty sweetness would be the solution. As are most amber lagers, Irish dry stouts are ideal for this. Brown porters tend to fare well, particularly if you want to bring out the char flavours in your grilled goodness.

If you eat grain or wheat-based dishes such as risotto, fluffy pasta, or polenta, choosing a light, hoppy beer like an American Amber Lager would work in your favour. The reason this combination works is that these light brews contain hops. Actually, the grain flavours complement the hops very well, and without feeling strong, the beer offers a refreshing taste.

A Bohemian-Style Pilsner or similarly crisp-yet-hoppy beer will do the trick if there is no Amber Lagers on the menu. For this pairing, Brooklyn Lager makes a great Amber Lager. Blonde ales and wheat beers are another range of beers that seem to fit well with pasta and polenta’s creaminess. The explanation is that, without overpowering it, they can also have a slight pop of flavour.

Another nice pairing will be Flanders red ale if you can’t find a Lambic on the menu. These Belgian ales are known for their elevated acidity and a slightly acidic taste. In general, red ales are good choices for these kinds of meals because they work so well with rich dishes’ general flavours.

If you’ve ever had a lobster dinner with champagne or white wine, then you’ve already found that Shellfish appears to do very well with fruity, crisp, light flavours. (Oh, and with that fizz, it is phenomenal!) This is because wine helps to bring out the salinity that makes seafood so flavorful.

Fortunately, there are quite a few beers out there that appear to have flavour profiles very close to very dry champagne. A top choice for craft beer brewers who do beer pairings is German Hefeweizen beer. A Belgian-Style Saison is another favourite.

If you’re willing to splurge and want an incredibly flavorful beer to accompany an equally delectable seafood meal, then a much better choice is to go for a Lambic fruit beer. Like Lindemans Kriek Lambic, sour Lambic beer is sure to add a big pop to your meal. Lambics, however, may not be a good fit for seafood dinners that are lightly flavoured.

Pork has a distinctly powerful, meaty taste that often involves adding many oils into each bite. This is especially true for meals that involve sausages, tenderloins, and a smoky BBQ, of course. However, the strong taste of pork fat appears to wash away many of the profiles of beer.

So the answer is to choose a beer that has an equally strong, preferably one that has a hoppy and bitter flavour profile that can match the sweet, fatty, and beefy tastes of pork.